Bears president and CEO Ted Phillips to retire after the 2022 season, ending a 23-year run

After 23 years as president and chief executive officer of the Chicago Bears and 39 years as a member of the team’s front office, Ted Phillips will retire at the end of the 2022 season. field, but was not consistent in it.

Last fall, Phillips, 65, told team president George McCaskey that he is considering retiring. After a series of talks, it was decided that Phillips would step down in February.

“When COVID came, it changed a lot of dynamics and gave me some time to think about my life, my work life,” Phillips said in an exclusive interview with the athletic. “I came to the conclusion that, my god, almost 40 years is a long time. It’s time to pass the baton and give myself some time. You know how this business can be, lots of hours and time away from family. I just turned 65. I feel fine. My health is good. I thought it was time to slow down and do what I want to do.”

McCaskey said his most important feeling about Phillips’ tenure with the Bears is gratitude.

Asked about what stood out about Phillips’ run, McCaskey said, “His humility. His intelligence. His consensus building. His steady hand. His refusal to go too high or too low. He is an excellent leader for the Bears. Unparalleled is the word that comes to mind.”

The renovation of Soldier Field nearly 20 years ago was Phillips’ crowning achievement. In the 1990s, the Bears found themselves in an outdated stadium with no revenue streams competitive with other stadium team deals. Without a new home, the bears might have had to take drastic measures to survive.

The rebuilding of Soldier Field significantly increased the Bears’ profitability and gave the team its first satisfactory football stadium in 100 years.

Known for his people skills and an easy, hearty laugh, Phillips approached the stadium dilemma by building trust with then-Chicago Mayor Richard M. Daley. Phillips and Daley found common ground in their love for the bears. They talked about players, games and coaches, as well as where they would play. Then Phillips asked the McCaskeys to give him permission to sign a five-year extension on their below-market lease at Soldier Field. At first glance, it was a step back for the Bears, but it paid off as it set the tone for a give-and-take relationship between the team and the city.

Phillips initially proposed demolishing the old Solider Field while leaving the historic colonnades and building a new stadium in the parking lot to the south. Daley rejected that idea but accepted a second proposal to rebuild the stadium in its existing location.

The agreed $630 million Lakefront Improvement Plan was funded by a hotel tax and more than $200 million from the Bears and the NFL.

“If I think about it, that was probably the pinnacle of my career,” said Phillips, who accomplished what George Halas and Michael McCaskey failed to do on countless attempts. “There was a lot involved, working together with the political strategists, architects, three contractors, politicians, different lawyers. It was an all-encompassing, 24-7 job for a while. Sometimes when I drive to Soldier Field, I still look at that place and say I can’t believe we made this happen.”

As his career draws to a close, Phillips spends most of his hours working on the Bears’ next home as the liaison for a stadium in the suburbs of Arlington Heights. George McCaskey said that when the Bears were approached about bidding on the land previously occupied by Arlington Park, Phillips examined the land’s value and guided the Bears through a complicated bidding process. Since their offer was accepted and a buy-sell agreement was signed, Phillips has been responsible for rights due diligence and has been in contact with experts in corporate land acquisitions, stadium architecture, traffic and financing.

It is planned to close the property before Phillips retires, but Phillips and McCaskey indicated there are too many unknowns and challenges to determine if and when a closure will occur.

McCaskey said the new president will likely be in charge of the new stadium, but not necessarily. “It depends on that person’s skills,” he said.

It is also possible that Phillips will be retained as a consultant for the project. Both McCaskey and Phillips said they are open to the possibility but haven’t talked about it yet.

The organizational chart was changed in January. In the past, CEOs reported to Philips. New CEO Ryan Poles reports to McCaskey. When the change was announced, McCaskey cited the Arlington Heights project as the reason.

But there was more to it.

“The reality is that the team was not a consistent winner,” Phillips said. “So I spoke to George and told him that we needed to make some changes to football coverage, and the decision was made to make a change.”

During Phillips’ reign, the Bears had a .480 win rate and failed to make the playoffs in 73 percent of their seasons. Phillips called the failure to win “my biggest disappointment.”

“My role was to be a sounding board with the general manager, to provide resources to support the team,” he said. “We have relied on our GMs to set up the right structures and have the right evaluation processes in place. The bears’ Achilles heel over many decades has been to have the right quarterback in place who is not only talented but can lead and raise the level of talent around him. I don’t think the head coach or general manager would have changed that.”

The Bears’ losses could not be attributed to facilities. Phillips oversaw two major renovations to Halas Hall that gave the Bears a world-class home. In 2012, 30,000 square feet was added to the Lake Forest building, which opened in 1997. And in 2019, nearly 200,000 square feet were added.

“Thanks to Ted’s efforts, we have one of the best facilities in the league,” McCaskey said. 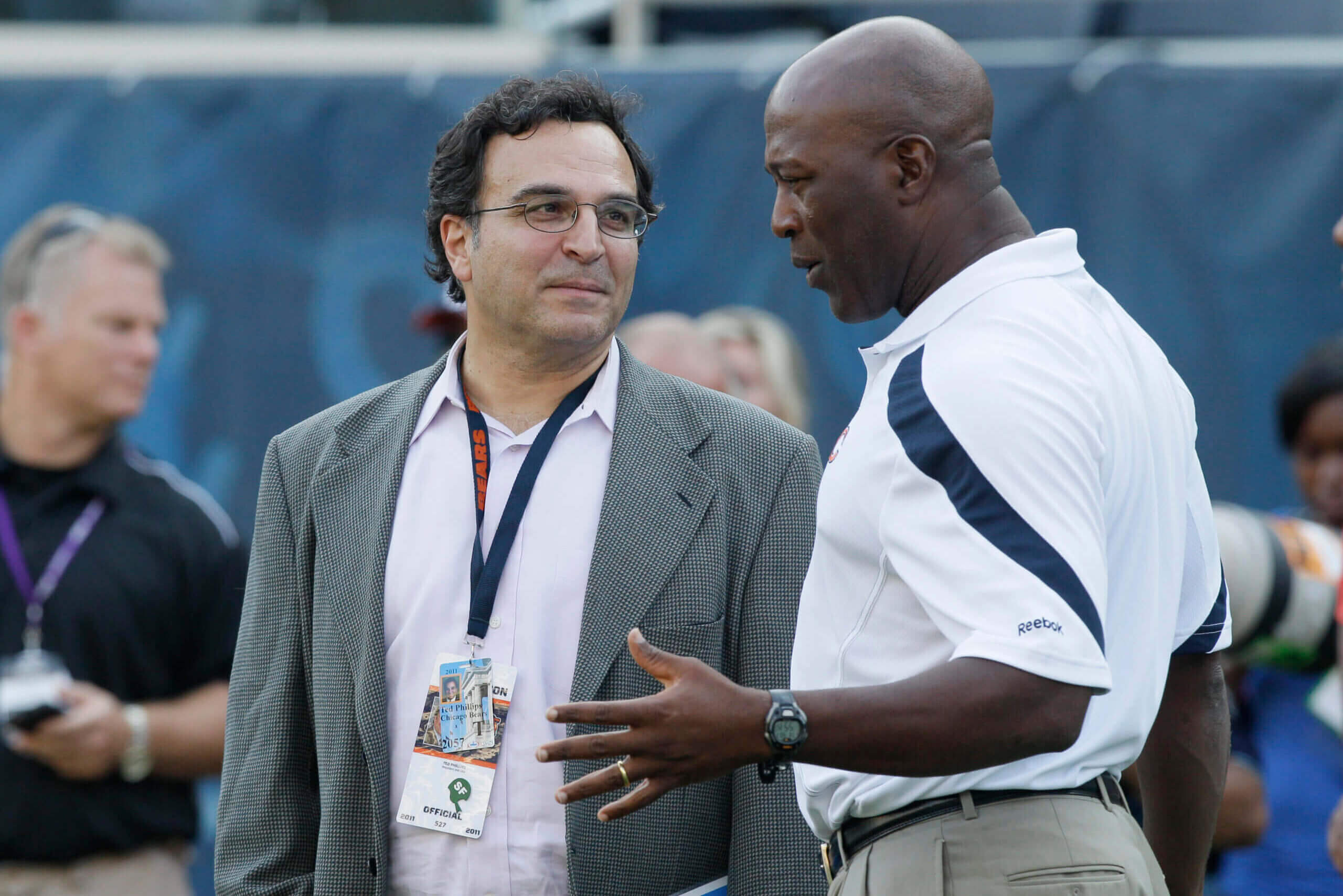 When Phillips started working for the Bears in 1983, he reported to the original Halas Hall, which cost about $98 million less to build than the latest renovation of the new Halas Hall. It is one of many ways to measure organizational progress through Phillips’ time. In his first year with the team, the Bears employed 50 people, including nine coaches. Now the team employs about 250 people, including 25 coaches. The Bears went from one practice field (not counting the public park down the road or the high schools they attended) to five.

When Phillips became team president in 1999, the average NFL team’s worth was $400 million, and the Bears were probably below average because of their stadium situation. Now Forbes estimates the team is worth $5.8 billion.

“The growth is tremendous,” Phillips says. “It’s nice to be a part of that. It means my work is different every day. You never know what’s coming, from finance to football, from marketing to public relations, from fan experiences to community relations.”

It was all beyond his imagination when he was hired by the Bears on September 28, 1983. Born in New Hampshire, Phillips graduated from Notre Dame in 1979 and took a job at the accounting firm Ernst and Whinney in Chicago. He was assigned to prepare tax returns for George Halas, the McCaskey family, and the Bears. For example, Phillips Bears met general manager Jerry Vainisi, who hired him as a team controller.

When Vainisi was fired after the 1986 season, there was a void in the Bears front office. After several months of talks, Bill McGrane, the then director of administration for Bears, convinced Phillips to ask Michael McCaskey to make him responsible for negotiating player contracts, even though Phillips had no experience in the role. McCaskey took a gamble on Phillips and promoted him to finance director.

Phillips negotiated all Bears player contracts from 1987 to 2000 and learned about football management, often consulting with former Bears general manager Jim Finks, who was with the Saints at the time, and Giants general manager George Young. He was promoted to vice president of operations in 1993 and took on the additional responsibilities of overseeing football operations.

In early 1999, Michael McCaskey failed an attempt to hire David McGinnis as head coach. His mother, Virginia McCaskey, then decided to replace Michael as team president. At a meeting at McCaskey’s suburban home, Virginia and her husband Ed Phillips told him they wanted him to succeed Michael.

On February 10, Phillips assumed the title of president and chief executive officer, making him the fourth president in team history and the first not from the Halas line.

Angelo was the Bears’ first general manager in 15 years. Phillips and Angelo worked well together for ten years when the Bears played four times in the playoffs and once in the Super Bowl and had a win percentage of .540. Phillips called the Angelo years the pinnacle of his tenure from a football standpoint.

“I’m really proud of the fact that I had a hand in getting Jerry on board,” Phillips said. “I am eternally grateful to Jerry for putting together a really solid team and bringing in Lovie and a great coaching staff. We’ve had some really good years.”

Phillips also left footprints at the league level. He chairs the NFL’s Employment Benefits Committee and is also a member of the Management Council’s Executive Committee Working Group and of the CBA Player Benefits Plans Committee.

As he prepares for the next phase, Phillips said he cherishes his friendships around the NFL and appreciates the relationships at Halas Hall. He thanks the people he has worked with for everything accomplished during his tenure.

“I am so blessed,” he said. “The McCaskey family has had so much faith in me. I feel part of their family. It is truly a dream come true to work for such a cherished franchise and family with the most humble people imaginable but at the same time have a fierce desire to win football matches. My career has been a celebration every day.”

Sony Interactive Entertainment is planning to release a remake...

Sony Interactive Entertainment is planning to release a remake...