Ben Affleck jets off with Matt Damon after J.Lo wedding

Ben Affleck and Matt Damon give “The Departed” a whole new meaning.

The longtime best friends left together on Sunday instead of Affleck to honeymoon with Jennifer Lopez after the couple’s second wedding.

Affleck, 50, and Damon, 51, were spotted riding a private jet with the “Argo” star’s three children at an airport in Georgia.

Affleck looked exhausted after the three-day wedding as he loaded his friends and family onto the plane.

The “Gone Girl” star rocked a tousled beard and casually dressed in jeans and a T-shirt. Meanwhile, his “Good Will Hunting” co-star tried to keep a low profile, wearing black pants, a navy T-shirt, a black baseball cap and a backpack.

Damon was also joined by his wife, Luciana Barroso, with whom he flew to Georgia last week.

Affleck’s children, Violet, 16, Seraphina, 13, and Samuel, 10, were also dressed in cozy clothes for the flight. He shares the trio with ex-wife Jennifer Garner, who did not attend Bennifer 2.0’s wedding due to a reported scheduling conflict.

Lopez, 53, and Affleck, who married legally in Las Vegas last month, said Saturday for the second time “I do” with a lavish, all-white wedding.

Affleck’s younger brother, Casey Affleck, was not present at the wedding as he apparently had to take his son Atticus (14) to soccer practice.

Affleck rocked jeans and a T-shirt for the private flight. 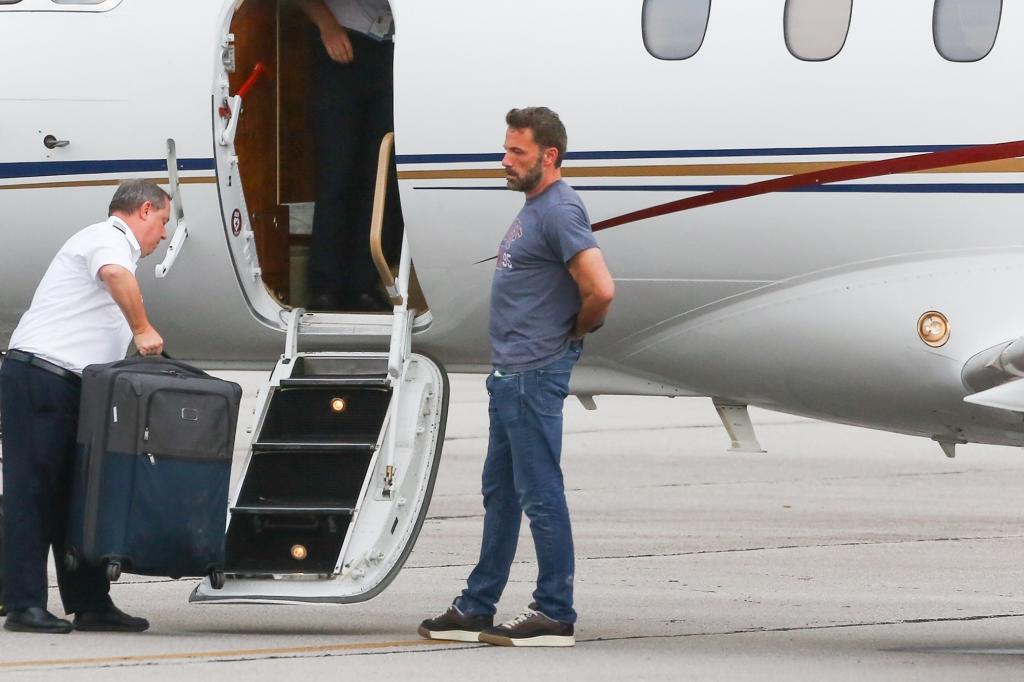 Affleck rocked jeans and a T-shirt for the private flight.

The Grammy winner obscured (if you can call it…

Ben and the singer “Let’s Get Loud” capped off their wedding weekend with an intimate Sunday brunch.

It’s unclear if the newlyweds have another honeymoon in the works, as they’ve already enjoyed a romantic trip to Paris after their secret Sin City wedding.

The couple met in 2001 on the set of their maligned movie “Gigli”, while Lopez was married to her second husband, Cris Judd. Shortly after she and Judd broke up in 2002, J.Lo began dating Ben, and he even proposed to the “Marry Me” star that year.

They eventually called off their engagement in 2004 and married other people: Ben married Garner and Lopez married Marc Anthony, with whom she shares twins Max and Emme (14). But when things didn’t go well for their respective husbands , the couple revived in 2021.

Affleck proposed for a second time in April — and this time they finally made it down the aisle.

There's a reason so many seniors routinely sign up...

More than 65 million people in the United States...

The Bank of England launched a historic intervention in...

There's a reason so many seniors routinely sign up...

More than 65 million people in the United States...