Bride notices her bridesmaid trying to ‘hit on’ groom

A newlywed bride has noticed a worrying detail in her big day photos.

The American bride shared a number of cheerful snaps of the bridal party posing back to back, quickly drawing attention to the brunette bridesmaid standing next to the groom.

In one shot, posted to TikTok, you can see the happy couple smiling side by side, but the bridesmaid had her hand tied around the groom’s arm.

In another photo as the bride and groom stare into each other’s eyes, the bridesmaid holds the groom’s hand.

On TikTok, the American bride (left) shared a number of happy snaps of the bridal party posing beautifully back to back, quickly drawing attention to the brunette bridesmaid (right) standing next to the groom (center)

“Didn’t she get the memo that she wasn’t the bride?!!!!!” one person wrote in the comments.

Another added: “My thoughts are that the photographer is trying to tell you something.”

A third admitted they “would have lost it” had the same thing happened to them.

“I was going to get a divorce,” said another.

The video quickly gained over 18 million views, but the TikTok account has now been deleted. 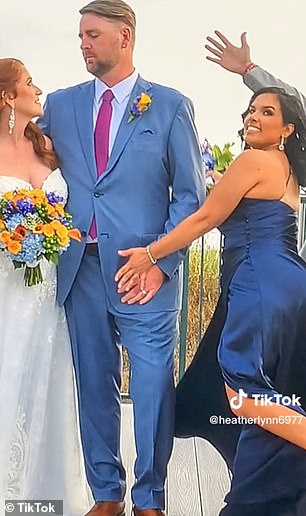 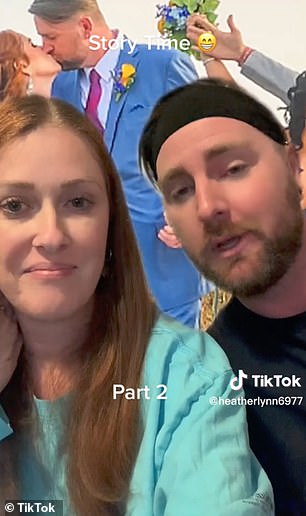 In one photo as the bride and groom stare into each other’s eyes, the bridesmaid holds the groom’s hand (left). The couple shared a statement in a TikTok follow-up (right), with the groom claiming the bridesmaid lost her balance

In a follow-up video, the bride gave an explanation for what’s happening in the strange photos next to her now-husband.

The man claims the bridesmaid lost her balance and was about to fall, so he offered to support her.

“The photographer told the bridal party to strike a silly pose while my wife and I were kissing and she did and she almost fell over,” he said.

“I’m sorry to disappoint anyone who wanted me to be a cheater and the bridesmaid a homebody.”

But other TikTok users did not believe this to be true.

“If I lost my balance, I would have grabbed an arm, not a hand. Moreover, there are several poses where they hold hands. No balance issues there,” one person wrote.

“I’m sorry she’s even holding his hand while you guys are KISSING?!?! And he grabs her right back honey. How are you ignoring that part,” said another.