A birth facility that can grow up to 30,000 babies a year in artificial wombs could solve the world’s low birth rates, which Elon Musk says pose the greatest threat to human civilization.

A new concept video takes viewers on a tour of The EctoLife Artificial Womb Facility, where hundreds of fetuses are contained in transparent pods that are temperature-controlled and have an umbilical cord to receive oxygen and nutrients.

Hashem Al-Ghaili, a film producer and biotechnologist, created the true-to-life film to spark a conversation about such technologies that can help women who have had their womb give birth, reduce premature births, and reverse population decline

The process would use in vitro fertilization, which would allow parents to choose the “most viable and genetically superior embryo,” which can also be genetically engineered to modify traits, including physical strength and eliminating hereditary diseases.

Although the video is a concept, Al-Ghaili said it is based on “50 years of groundbreaking scientific research conducted by researchers around the world,” and such birth pods could be widespread in “just decades.”

The concept video aims to spark a conversation about the future of childbirth. The maker foresees the change from real wombs to artificial wombs housed in a research lab

The video plays out like a commercial for EctoLife, which “allows infertile couples to conceive a baby.”

The facility features 75 laboratories, each containing up to 400 growth capsules designed to mimic the real conditions of the mother’s womb and contain sensors that monitor the baby’s vital signs.

The pods are also equipped with a camera powered by artificial intelligence that continuously scans the fetus for possible genetic abnormalities and monitors the overall growth process.

Parents get an app that plays live footage of their baby in the pod, along with vital signs.

The video also says that parents can record messages played in the artificial womb and create music playlists for their babies.

While the video focuses on improving birth rates, it also points out that the birth farm is for women who fear pregnancy because of the pain and recovery required after giving birth.

“Say goodbye to the pain of childbirth and muscle contractions,” says the video narrator.

“EctoLife offers a safe, pain-free alternative that helps you deliver your baby stress-free.”

The delivery process requires parents to press a button on the pod.

The amniotic fluid is drained from the inside and the artificial womb opens, allowing parents to hold their baby for the first time.

The video, which looks like a scene from the 1999 movie The Matrix, is just a concept for now, but could be used in the future as the world faces a population decline.

While making the comment when the world’s population reached 7.9 billion – it recently reached eight billion – the tech mogul warned that the world desperately needs people. 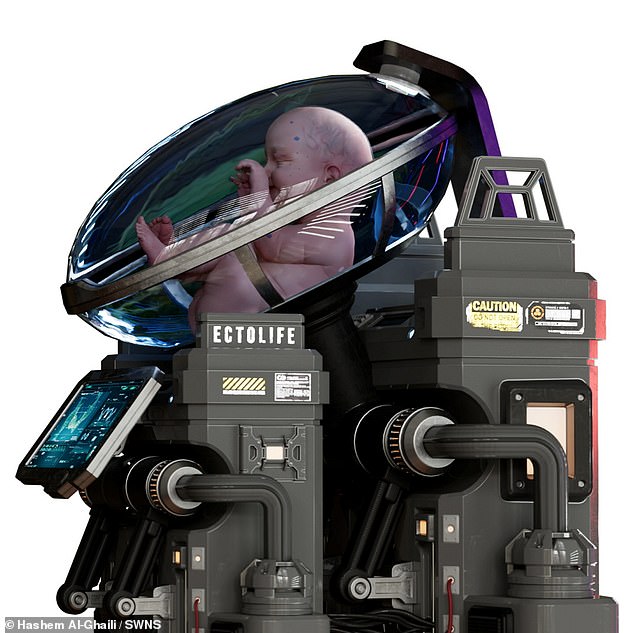 The concept facility, called EctoLife, would grow up to 30,000 babies a year in the birthing pods 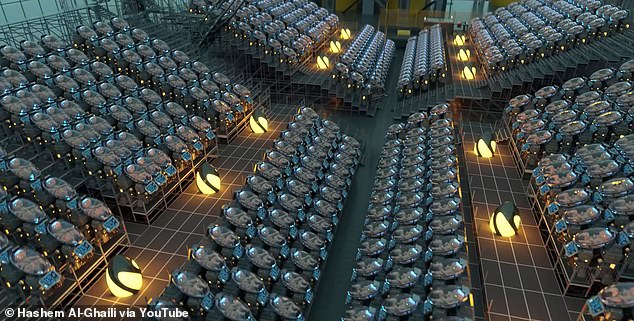 The facility features 75 labs, each containing up to 400 growth capsules 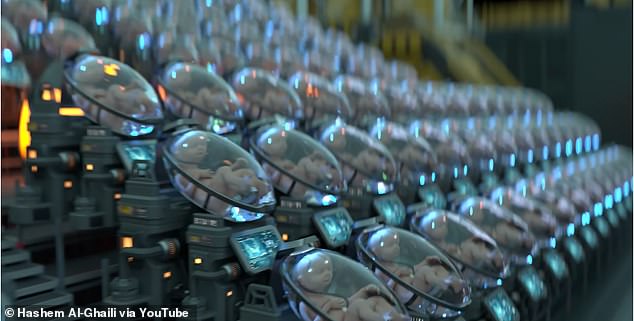 Birth rates in developed countries have been declining for years, which has dragged the overall figure down.

The average woman had two-and-a-half children in 2020, compared to five 50 years ago.

Rates are even lower in the UK (1.74) and the US (1.77). Higher education and contraception and more women entering the workplace are said to be behind the respective trends.

The birth pods would be an alternative for couples with infertility and those who are hesitant to carry a baby themselves.

And the new video may seem like a breakthrough, artificial wombs have been the talk of the scientific community since 1923, when it was first introduced at a lecture by an English biologist.

Then in 1955, scientists unveiled a tank that would grow a fetus.

This design contained amniotic fluid, a machine that connects to the umbilical cord, blood pumps, an artificial kidney and a water heater. 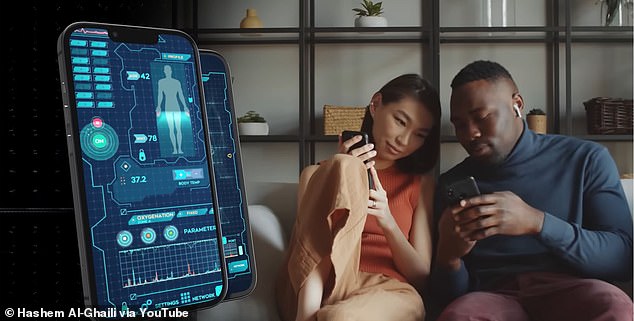 Parents get an app that plays live footage of their baby in the pod and displays vital signs.

However, technology is advancing and scientists are thinking of more options that can grow from a pod or tank.

In 2020, researchers succeeded in creating a viable artificial womb in rabbits.

Anthony Atala of the Wake Forest Institute for Regenerative Medicine and colleagues made uterine tissue cultured from rabbit uterine cells, which they seeded onto a biodegradable scaffold.

Developed by the team, this broad approach has previously been used in humans to restore the function of tubular organs such as the urethra and specific hollow organs, including the bladder and vagina.

By implanting the bioengineered scaffolds into 14 rabbits, the researchers showed that the artificial wombs could create the native, tissue-like structures needed to support normal reproduction.

Six months after the female rabbits were implanted with the scaffolds, the animals were allowed to mate naturally with fertile males.

“The rabbits with cell-grafted constructs had normal pregnancies in the reconstructed segments of the uterus,” said author Renata Magalhaes of the Wake Forest Institute for Regenerative Medicine. 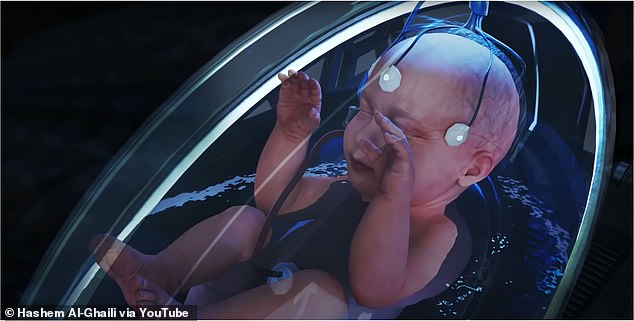 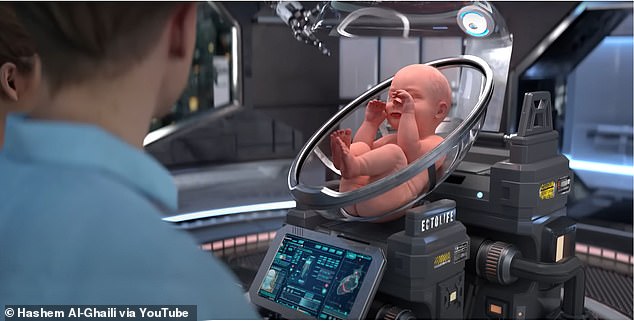 During the delivery process, parents need to press a button on the pod, which opens the glass structure and allows parents to take their baby home

Designer babies are not science fiction either, as experts have worked tirelessly to perfect the procedure.

Chinese scientists admitted they first altered the genes of human embryos in 2015 when they modified the gene responsible for β-thalassemia, a potentially deadly blood disorder, using a germline editing technique known as CRISPR/Cas9 .

But the researchers said their results revealed “serious obstacles” to using the technique on human embryos.

The announcement confirmed rumors that some researchers had conducted ethically questionable genetic experiments.

Some scientists reacted with horror to the idea, fearing that it could be misused to allow parents to “select” the genes they will pass on to their grandchildren.

If you enjoyed this article…

EXPLAINED: PREMIUM BIRTH AND THE RISKS FOR BABIES

About 10 percent of all pregnancies worldwide result in preterm birth – defined as delivery before 37 weeks.

When this happens, not all of the baby’s organs, including the heart and lungs, will be developed. They may also be underweight and smaller.

Tommy’s, a UK-based charity, says this could mean preemies are “not ready for a life outside the womb.”

Premature birth is the leading cause of neonatal death in the US and UK by figures.

Babies born prematurely are often taken to neonatal intensive care units, where they are cared for 24 hours a day.

What are the survivability?