Editor’s Note: If you or someone you know is struggling with suicidal thoughts or mental health issues, call the National Suicide Prevention Lifeline at 800-273-8255 to contact a trained counselor or visit the NSPL site.

Ellen DeGeneres issued a statement on the death of Stephen “tWitch” Boss, the longtime DJ and co-executive producer of her former talk show, saying on Wednesday she is “heartbroken” over his passing.

“My heart is broken. tWitch was pure love and light,” she wrote on Instagram. “He was my family and I loved him with all my heart. I will miss him. Please send your love and support to Allison and his beautiful children – Weslie, Maddox and Zaia.

Allison Holker Boss, his wife, confirmed in a statement to CNN on Wednesday that her husband had passed away at the age of 40.

He died by suicide, according to the LA County Medical Examiner. The LA County Coroner’s Office concluded their investigation and released the report on his death on Wednesday.

Boss began his DJ duties on “The Ellen DeGeneres Show” in 2014, eventually becoming a co-executive producer and occasional guest host.

Amid trials on the show, which stemmed from allegations against DeGeneres from some employees about a toxic work environment, Boss publicly stood by his friend DeGeneres.

“We can’t say too much about it legally, but I will say this, there has been love,” Boss told Us Weekly. “Of course there are some things that need to be addressed, but from my point of view and from countless others, there has been love. I’ll leave it at that until there’s a time when we can speak more publicly. Love has been and love will remain.”

As the show geared up for its finale earlier this year, Boss looked back fondly on his time there, telling Entertainment Tonight that saying goodbye was a challenge.

“Things have a beginning and they have an end, so I know that, but I think as the end approaches, you naturally start to miss it, like we do, and you start enjoying all the little things. moments when you say, “Well, maybe I’m not quite ready to say goodbye yet,” he said. “But at the same time, this is the natural thing to do and I’ve said it before, too. I’m just excited that my friend is starting her new chapter of the rest of her journey, you know?”

When it came time to sign off on the “Ellen” show, DeGeneres surprised Boss with a touching tribute on sky. At one point she said, “Well, I don’t want to say goodbye.” 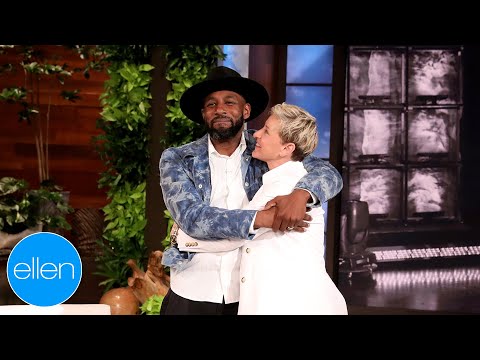 She went on to talk about the first time they met – appropriately, for a dance class at her house.

“It was like a crash course in getting to know each other…and he was so patient with me,” she said. “We just bonded by learning how to dance together.”

DeGeneres further noted that when he was absent from the show for whatever reason, there was a piece missing.

“I’m counting on him to watch and make lame jokes,” she said. “I love you, tWitch, and you know how much. We tell each other that every day when we say goodbye. After the show, we both say “love you.” He says, “Love you very much,” and I say, “Love you.” And so he will never disappear from my life.

Boss reacted emotionally to the video piece and DeGeneres’ words.

“I love the family we’ve got and something I’ll always remember is that you gave me a place where I can just be myself,” he said. He jokingly added, “Whether I was a real DJ or not, I always felt at home.”

DeGeneres quipped back, “You’re a fake DJ, but you’re a really good man.”