The Israel Defense Forces said it believed with “high probability” that a soldier accidentally shot and killed a teenage Palestinian girl during a battle with Palestinian gunmen in the northern West Bank town of Jenin.

The girl, Jana Majdi Assam Zakarna, 16, was found dead on the roof of her home with a gunshot wound to the head after Israeli troops withdrew from Jenin, the official Palestinian news agency WAFA reported.

The IDF, citing an initial investigation into the shooting, said a Border Police sniper fired at Palestinian gunmen who fired at soldiers from rooftops during the raid.

“Following a preliminary investigation, it has been found that there is indeed a high probability that the girl who died was hit by an accidentally fired shot at armed men on a nearby roof, from which shots were fired at the armed forces.” The IDF said in a statement Monday afternoon.

“It appears that the murdered girl had been on the roof of one of the houses near the gunmen,” the army said.

The IDF dismissed claims that the teen was shot on purpose as “baseless and baseless”.

The army also investigated whether Zakarna might have helped the gunmen by observing or filming the Israeli forces during the raid.

Jana Majdi Assam Zakarna, 16, who was killed in a shootout between Israeli forces and Palestinian gunmen in the West Bank town of Jenin, December 11, 2022. (Social media)

“First, I express my sorrow for her death, as well as for any death of anyone who was not involved in terrorism, if indeed that was the case,” Gantz said at a parliamentary meeting of his National Unity party.

He said the raid was designed to arrest Palestinians suspected of recent shootings and those associated with terror organizations.

“The case is under investigation and I can assure you one thing, unlike those who stand along the roads with weapons, stones and Molotov cocktails, waiting for an opportunity to kill Israeli girls and boys, women, the elderly and children, IDF soldiers to kill. don’t intentionally shoot at uninvolved people,” Gantz said.

“The IDF will continue to act to thwart terrorism wherever and whenever it is required to observe open fire rules,” he said. “The commanders and soldiers have full support to continue to fulfill their mission with professionalism and determination.”

Three other Palestinians were reportedly injured in the clashes, which included live fire and explosives, when Israeli troops and border police, some of them undercover, raided a business in Jenin late Sunday.

A Border Police spokesman confirmed that troops opened fire and said three terror suspects have been arrested during the overnight operation.

“Following the arrests, violent riots broke out, with live fire and explosives aimed at from various distances [Israeli] a Border Police spokesman said in a statement. “The undercover agents, Border Police troops and Israel Defense Forces soldiers returned fire at the terrorists.”

#شاهد It is important that you perform a direct debit #جنين pic.twitter.com/DAVZmPsq7Z

Footage shared on social media showed troops emerging from a van and entering a storefront, emerging with Palestinians with their hands tied.

A local wing of the Palestinian Islamic Jihad terror group confirmed that they opened fire and hurled explosives at Israeli troops.

The three arrested suspects were handed over to the Shin Bet security service and an M16 rifle used by the Palestinians was seized, Israel said.

Tensions in the West Bank have been high over the past year, with the IDF conducting an ongoing major counter-terror offensive, mainly targeting the north of the West Bank to counter a series of Palestinian attacks.

The operation has led to more than 2,500 arrests in near-night raids, but has also claimed the lives of more than 165 Palestinians, many of them — but not all — in attacks or during clashes with security forces. 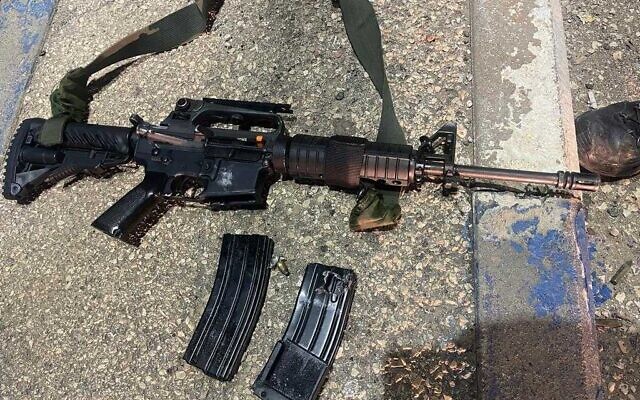 An M16 rifle seized by Israeli forces during a raid in Jenin on December 11, 2022. (Police spokesman)

Many deadly clashes have occurred in the Jenin and Nablus area, where Israeli forces have concentrated most of the arrest operations.

In recent months, Palestinian gunmen have also repeatedly targeted military posts, troops operating along the security barrier in the West Bank, Israeli settlements and civilians on the roads.

The IDF has recorded about 300 shootings and attempts against Israeli civilians and soldiers in the West Bank this year, compared to 91 last year.

That’s why we started the Times of Israel a decade ago – to provide discerning readers like you with must-read coverage of Israel and the Jewish world.

Rosenthal: The culprit in Carlos Correa’s deflated free-agent contract? His ankle more than his agent

Wall Street rises on optimism ahead of inflation report

Rosenthal: The culprit in Carlos Correa’s deflated free-agent contract? His ankle more than his agent