In first, Palestinians take off to Cyprus from Eilat’s Ramon Airport

A group of Palestinians departed for Cyprus on Monday, using Ramon Airport outside the southern city of Eilat for the first time as part of a pilot program allowing the facility to be used by residents of the West Bank for certain flights, part of a series of gestures from Israel aimed at easing the lives of Palestinians.

To this day, Palestinians wishing to fly abroad had to travel to Jordan and catch a flight there, or obtain a hard-to-find entry ticket to Israel to fly from Ben Gurion Airport.

Arkia Airlines operates the first service, which flies 40 residents of Bethlehem and Hebron from Ramon Airport to Larnaca at 11:30 AM. A return flight is scheduled for Friday. The route will also serve Israelis, who will sit alongside Palestinian passengers.

Flights to Antalya and Istanbul in Turkey, operated by Pegasus Airlines and AtlasGlobal, are also scheduled to start on Monday. However, the Israel Airports Authority announced a day earlier that those plans were delayed.

Oz Berlowitz, CEO of Arkia, said in a statement: “Until today, flights for Palestinians in a unique setting, and especially from Ramon Airport, have been just a dream. And indeed, the dream has been fulfilled.”

Amir Aasi, a strategic adviser to Arkia who initiated the program, told the Israel Hayom daily that he had received inquiries from Palestinians in the Gaza Strip who were interested in flying from the airport.

At this stage, residents of the blocked area are not allowed to use Ramon’s flights. Israel and Egypt maintain a strict lockdown of the Strip in an effort to stop the Hamas terror group that rules Gaza from importing weapons and weapons.

Palestinian passengers pass through a security checkpoint as they exit the West Bank on their way south, in addition to airport checks for all passengers.

The initiative was led by Israel’s military liaison with the Palestinians, Major General Ghassan Alian. The Coordination of Government Activities in the Territories (COGAT) has been working with the Shin Bet and the Israel Police to ensure proper security protocols at Ramon Airport as part of the initiative, Alian’s office told Hebrew media earlier this month. 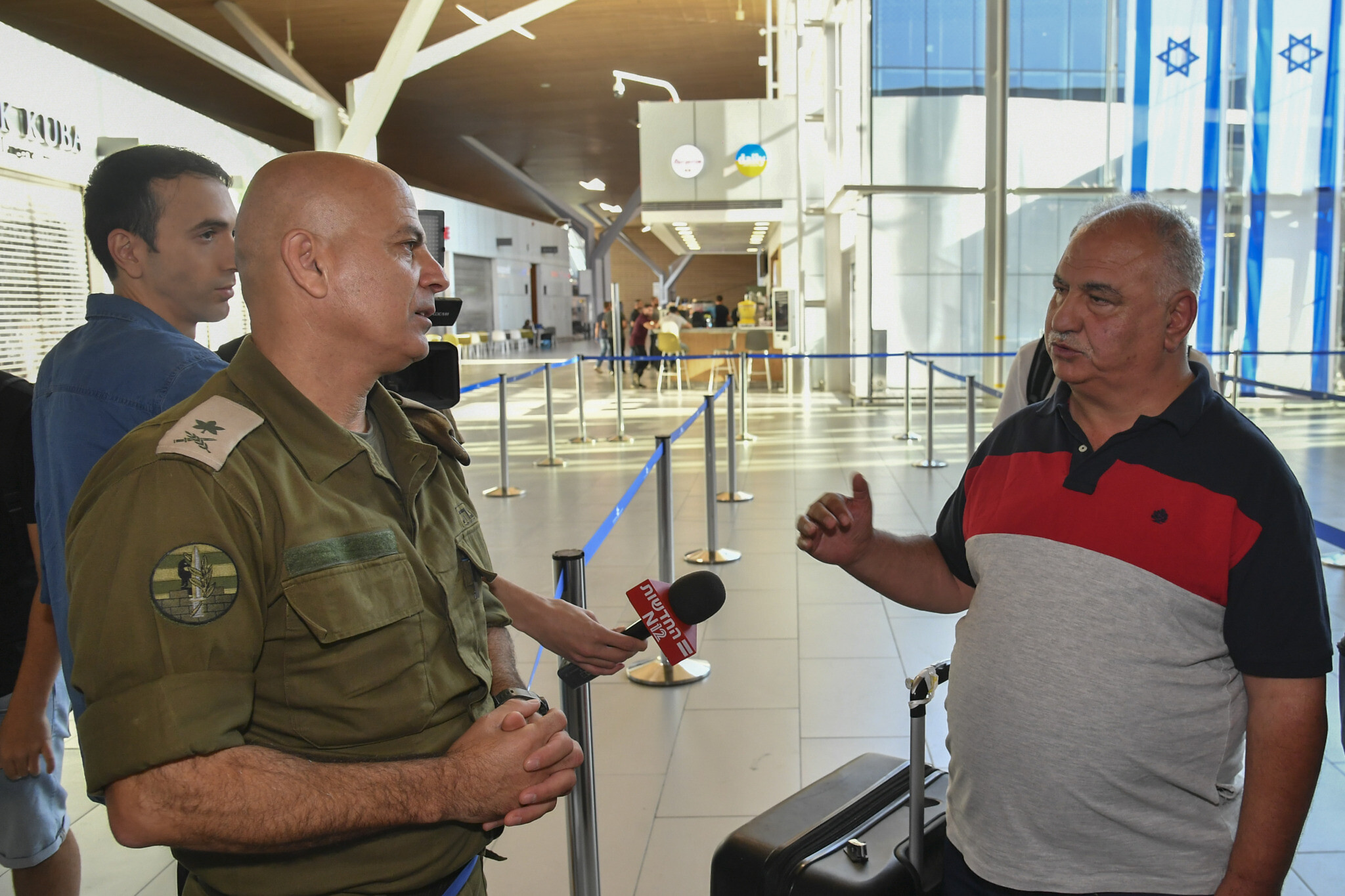 A Palestinian resident of the West Bank (R) speaks with Israeli media and an IDF officer before boarding his flight at Ramon Airport on Aug. 22, 2022. (Flash90)

Built just north of the tourist center of Eilat on the Red Sea coast in Israel’s southern tip, Ramon Airport was intended as a gateway for European tourists to reach the resort town, as well as domestic flights.

To get there, Palestinians from the northern West Bank will have to travel five hours or more, more than double the distance to Amman, although the latter route can involve long waits at the Allenby Bridge border crossing.

The COGAT initiative was rumored to be announced ahead of US President Joe Biden’s trip to Israel last month as part of his package of steps aimed at improving Palestinian livelihoods, but was instead officially presented in August.

A Palestinian official speaking to The Times of Israel at the time said Ramallah had not been consulted about the idea. He dismissed it as impractical, arguing that the Palestinians should be allowed to have their own airport in the West Bank.

Last year, Regional Cooperation Minister Esawi Frej proposed to convert the site of the former Atarot Airport in East Jerusalem, where Israel plans to develop a controversial housing project for Jewish residents, into an airport under joint Israeli-Palestinian ownership. The plan has yet to get off the ground.

Deer become infected with a disease that is creeping...

KSI defeated Swarmz in the second round...

None of the people interviewed for this story about...

Deer become infected with a disease that is creeping...

KSI defeated Swarmz in the second round...

None of the people interviewed for this story about...