Messi, Mbappe and an uncomfortable rivalry defined by mutual respect

At some point on Sunday night, possibly just before the World Cup final but certainly once it is over, Lionel Messi and Kylian Mbappé will embrace and a thousand photographers at Lusail Stadium will rush to capture the moment.

Depending on the outcome, it will be seen as a knee bend to a legend of the game, finally exiting the World Cup podium a winner – or as a reluctant but respectful transfer of the flame, from Messi to Mbappé, a world champion for the second times at the age of 23.

Then they return together to their teammates, one group ecstatic in revelry, the other disconsolate. That will be the last time Messi and Mbappé see each other before they reunite in Paris Saint-Germain in about a week.

This is far from the first time two club mates have faced each other in a World Cup final; it has been a regular occurrence since 1990, when history was made by the Stuttgart duo of Guido Buchwald (West Germany) and Jose Basualdo (Argentina). But this will be the first time a World Cup final has pitted two club-mates in opposition with something like the global profiles of Messi and Mbappé.

Qatar, of course, brought them together. PSG’s emergence as a global force, like so many other things in the modern game, is a product of Middle Eastern investment. After PSG and the 2022 World Cup become two central pillars of its soft-power strategy, Qatar can lay claim to the two superstars who will garner more attention than anyone else when a huge global television audience tunes in to watch the final – and further National Day of Qatar, no less.


Who will win on Sunday? (Photo: JAVIER SORIANO/AFP via Getty Images)

Messi is all over Doha – his name is on the back of almost every Argentine shirt you see, his image stares at you from buildings, billboards, even ads for the local telecom company – and his name is on everyone’s lips during Sunday’s final .

It felt like it was his World Cup, on the way to the most glorious denouement. But France, as their coach Didier Deschamps said on Wednesday night after their semi-final victory over Morocco, “will do everything they can to make sure that doesn’t happen”.

The same goes for Mbappé. He’s not the type to stand on ceremony for anyone, including Messi. To see Messi at this World Cup is to see him as the captain of a group of players who have put him on a pedestal. They are submissive to him, content – desperate to – dance to his tune. It’s just not like that at PSG.

In some ways, Messi and Mbappé are unlikely teammates. Their skills are complementary, but it feels almost decadent for PSG to have brought them together with a third true superstar in Neymar. At a time when so many coaches are determined to move away from the cult of the individual, the Messi-Mbappé-Neymar axis represents something different.

In his column for The athleticformer PSG coach Mauricio Pochettino described the difficulty of putting Messi, Mbappé and Neymar in the same attack line.

“It is difficult to compare this Argentinian team with PSG,” said Pochettino. “Mbappé and Neymar also needed their space there, they had to feel like they were big boys at the club. And sometimes the other players struggled to understand whether they should play for Messi, or Mbappé, or Neymar.

“Mbappé needs a team behind him to play for him, but so do Neymar and Messi. That’s why they’re all leaders in their national teams. Everyone knows that when those three are together, amazing, incredible things can happen at the field, but of course it is not easy to find the right balance.”

That certainly sounds diplomatic on Pochettino’s part. Others have said the Messi-Mbappe-Neymar dynamic was the biggest problem the former Tottenham Hotspur manager faced during his time in Paris. One line that sticks in memory from one source was that the “big three” were “forced to share things they didn’t want to share” – be it goals, assists, penalties, attention or admiration.

Mbappe’s relationship with Neymar is known for being troubled; their on-pitch bickering over penalties during a game against Montpellier in August was perhaps the main flashpoint, but tensions between the pair predated that incident and have lingered. The relationship between Mbappé and Messi is more cordial – not close, but marked by mutual respect.

When Messi signed for PSG following Barcelona’s inability to extend his contract due to financial constraints, Mbappé said he was delighted at the prospect of playing alongside him. Indeed, Messi’s arrival was one of the factors that convinced the PSG board that Mbappé might sign a new contract after all rather than move to Real Madrid.

But there are pressure points. When Mbappé signed that huge new contract with PSG last May, he became the most powerful figure in the dressing room, with the kind of direct line to the club hierarchy that Messi had at Barcelona.

Reports in Brazil suggested Mbappe was consulted in the summer about the club’s dismantling of what was described as a South American dressing room clique, with Messi’s Argentina teammates Angel Di Maria and Leandro Paredes being cleared to join Juventus (the latter on a rental basis). .

As in any locker room, cliques persist. It makes sense that Messi, a 35-year-old who speaks little French, is closer to the likes of Neymar, Marquinhos, Marco Verratti and, perhaps surprisingly, his old Real Madrid opponent Sergio Ramos. Likewise, it makes sense that Mbappe is much closer to Moroccan full-back Achraf Hakimi than to the older players from South America.

It was interesting when Ander Herrera, another summer player, was asked about last season’s Messi-Mbappé dynamic. “Kylian will be the best player in the world for many years to come, but we all agree that Leo is number 1. No doubt,” said the midfielder, now on loan to Athletic Bilbao. “Mbappe has tremendous humility and a desire to learn from Leo.”

Dani Alves, who played with Messi at Barcelona and Mbappé at PSG, appeared to question that in a recent interview with Italian newspaper Gazzetta dello Sport. He described Mbappé as “a phenomenon that has not yet understood that those who play with him offensively are greater phenomena than him”, adding: “A great player must always know and understand who he is playing with. You have to be intelligent to take advantage of the potential of Neymar and Messi, two football geniuses.”

Alves suggested that Mbappé would “score 150 goals” if he entrusted Messi and Neymar with the ball more often.

Perhaps surprisingly, Messi exchanged more passes per 90 minutes with Mbappé than with Luis Suarez or Neymar in 2014/15, at the height of Barcelona’s ‘MSN’ partnership.

Messi has assisted Mbappé on six goals in Ligue 1 this season and while the obvious refutation is that the French league is weaker than La Liga, the two have also worked well together in Europe; for every 90 minutes in this season’s Champions League, they have created a combined 2.0 chances. Again, that beats the figure set for Messi-Neymar (1.9) or Messi-Suarez (1.7) for Barcelona in their victorious 2014-15 Champions League campaign. And Mbappe gets his fair share of goals.

It won’t be easy for Mbappé to be in the spotlight with Messi and Neymar, but in some ways he can learn from Neymar’s experience. When the Brazilian striker left Barcelona for PSG in a world record transfer in 2017, the party line was that he felt he needed to escape Messi’s shadow in order to thrive on an individual basis. 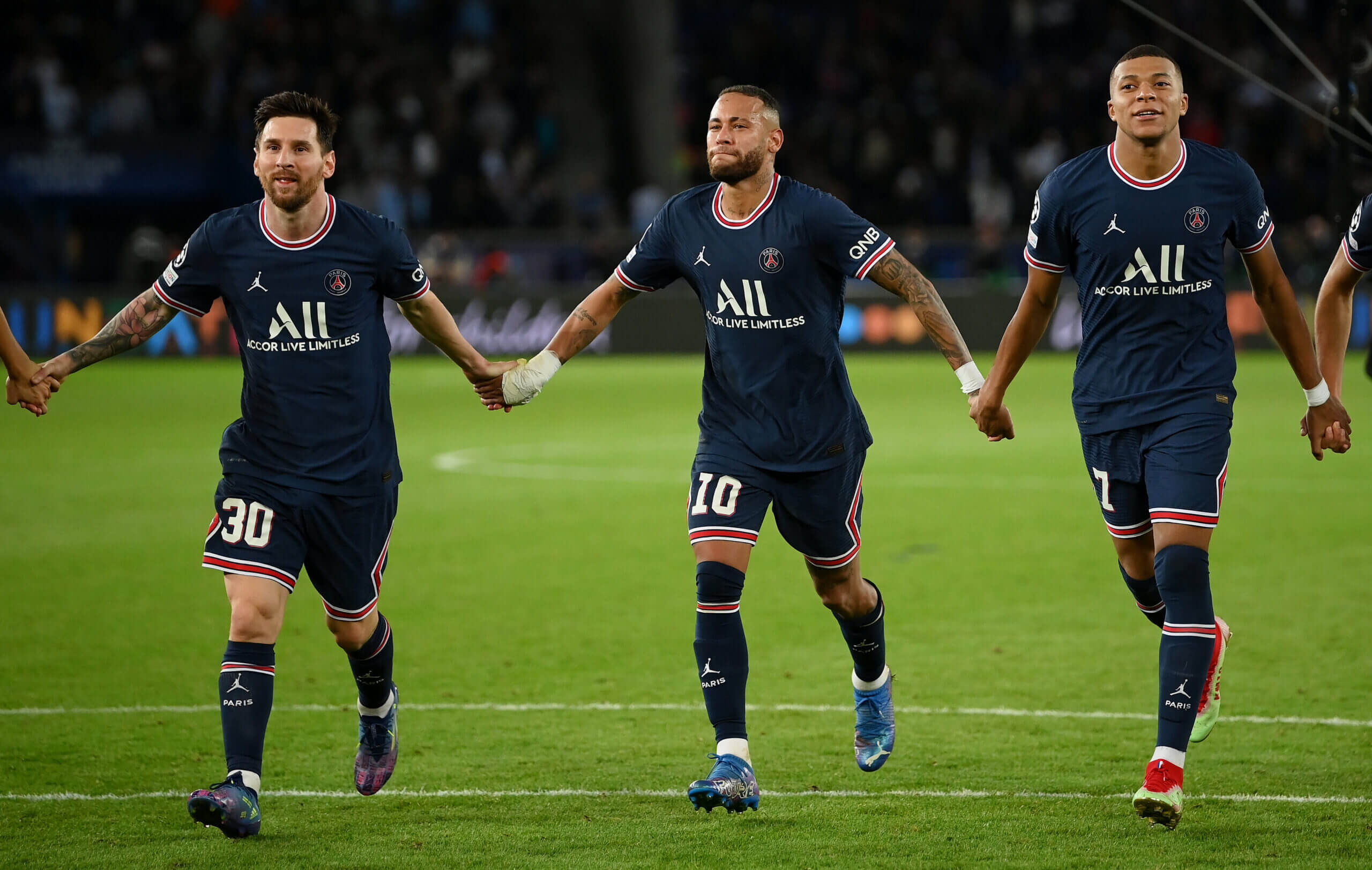 At least in his first few years in Paris, he discovered that living in Messi’s shadow had been more beneficial than he realized. Certainly when it comes to the Ballon d’Or talk, Neymar was much more prominent in his Barcelona days.

Messi has been good to Mbappe at PSG. Mbappe also good for Messi. But there is a lingering line from within the Mbappé camp that he believes he is better suited to play alongside a more orthodox centre-forward, perhaps an Olivier Giroud type. Messi, for his part, is clearly at his happiest when playing with quick-witted, nimble-footed forwards, of which Mbappé is perhaps the most extreme example.

The irony of it all, especially when it comes to the suggestion that Mbappé calls the shots at PSG, is that it’s hard to imagine either player being there for the long haul.

Just months after signing that new contract, Mbappé showed regret and was thinking about extending his bid to join Real. As for Messi, The athletic revealed in October that he is extremely attracted to the idea of ​​joining MLS franchise Inter Miami when his contract with PSG expires at the end of the season.

Rather than teammates – or rivals or opponents – Messi and Mbappé seem destined to be remembered as the leaders of their respective generations.

At the age of 35, Messi played in his last World Cup and is considering a move to MLS. He is in the twilight of his career. Just like other modern greats such as Luka Modric, Karim Benzema, Robert Lewandowski and Messi’s great rival Cristiano Ronaldo. It’s doubtful we’ll ever see any of them on the World Cup podium again.

A new generation is poised to take over, led by Mbappé, Erling Haaland and several others who are showing all signs of having grown up idolizing Messi and Ronaldo and trying to emulate their moves.

This World Cup final feels like it marks the end of one era and the beginning of another. The sight of Messi and Mbappé facing each other is as symbolic of that as it is of the Qatari influence that has brought such unforeseen changes to the football landscape over the past decade.

Sunday gives Mbappé the chance to show that he is ready to take the crown. It also offers Messi the chance to leave the World Cup podium with one last, lasting reminder of a talent who may not be surpassed for a long, long time.

Whatever the outcome between France and Argentina, that hug at the final whistle will be symbolic. None of the photographers present will want to miss it.

Gina Lollobrigida, known as the face of Italian film, dies

Six people, including a six-month-old baby, her teenage mother...

Shortly after the University of Georgia's national championship win,...

Comment on this storyRemarkBenjamin Franklin is credited with inventing...

Six people, including a six-month-old baby, her teenage mother...

Shortly after the University of Georgia's national championship win,...