Sharks are ‘walking’ on land longer to survive the climate crisis

The epaulette shark, a species of long-tailed carpet shark, is evolving amid the climate crisis by enduring extended periods of hypoxia or lack of oxygen, to be able to walk on land for up to two hours and escape warming oceans.

The shark, which grows to about three feet in length, was recently found to be able to move 30 feet on land using its paddle-shaped fins — previous research showed it couldn’t live more than an hour outside the water.

The discovery, discovered by biologists at Florida Atlantic University (FAU) and a team in Australia, suggests that the creature developed this ability as a result of changes in its reef home in the Pacific Ocean and that it can survive other sea creatures because it can escape. to hostile environments as conditions change.

The research to date “indicates that this species has undergone adaptations to endure some of the harsh conditions expected for the 21st century, but possibly not all of them.”

However, it took the epaulette shark nine million years to develop its locomotion.

Scroll down for video

The epaulette shark evolved in an effort to escape the warming ocean waters. He has done this by walking on land – and can now stay out of the water for up to two hours

According to Marianne Porter, a professor of biomechanics in the FAU’s division of biological sciences, sharks have an excellent ability to cross land to get to more hospitable conditions that other species did not have.

The fascinating ‘walking sharks’ are found in the waters of Northern Australia and Indonesia and have evolved to use their four lateral fins to propel themselves across the sea floor.

They have also evolved the ability to survive in low-oxygen environments, meaning they can shuffle through shallow water and even lift themselves out of the sea to move between pools at low tide.

“Such locomotor properties may not only be key to survival, but may also be related to their sustained physiological performance under challenging environmental conditions, including those associated with climate change,” the study reads, published in the Integrative and Comparative Biology journal. 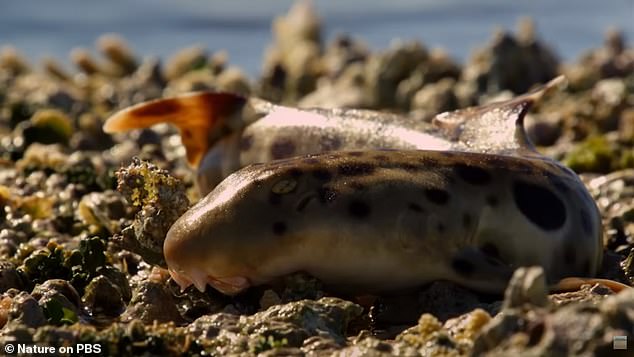 The shark, which grows to about three feet in length, was recently found to be able to move 30 feet on land using its paddle-shaped fins — previous research showed it could live out of the water for no more than an hour

“Findings to date suggest that this species has adaptations to tolerate some, but perhaps not all, of the predicted challenging conditions for the 21st century.”

The reason the epaulette shark has a higher chance of surviving climate change is because it can walk in more suitable environments, Marianne Porter, a professor of biomechanics in the FAU’s department of biological sciences, told The Guardian.

“You might not find beautiful, tropical beaches that hard, but in reality tide pools and coral reef environments are quite harsh, subject to warm temperatures when the tide is out and a lot of changes, a lot of things happen when the tide comes and goes out,” said they.

Other research from Florida Atlantic University that the shark’s early life can affect its ability to move from water to land and even the ball-bellied babies have the knack.

And according to the team, this breaks all the rules for survival.

“The epaulette shark’s ability to move efficiently between micro-habitats under these challenging environmental conditions may have a direct impact on their survival and physiological responses to climate change,” researchers shared in a statement.

‘Yet there are very few studies that have examined their kinematics (body movements). Those that do have focused only on the stages of adult life. No study to date has looked specifically at their locomotion (how they move) during the early stages of life.’

Newborns, or the newborn sharks, retain embryonic nutrition through an internalized yolk sac, which causes the bulging abdomen.

As the baby grows into a juvenile, it begins to actively forage for worms, crustaceans and small fish and becomes slimmer. 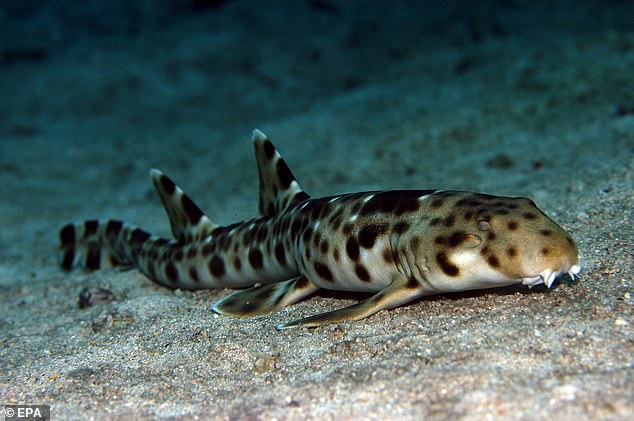 During development, the yolk that the newborn sharks store begins to decrease as they develop into juveniles. When the yolk runs out, the shark begins to actively forage.

Because the newborn has a bulging abdomen, compared to a juvenile, researchers expect differences in locomotor performance to be observed in these walking sharks.

To test their hypothesis, they examined the movement kinematics of neonates and juveniles during the three waterways they use — slow to moderate walking, fast walking and swimming — using 13 anatomical landmarks along the fins, girdles and midline of the body. 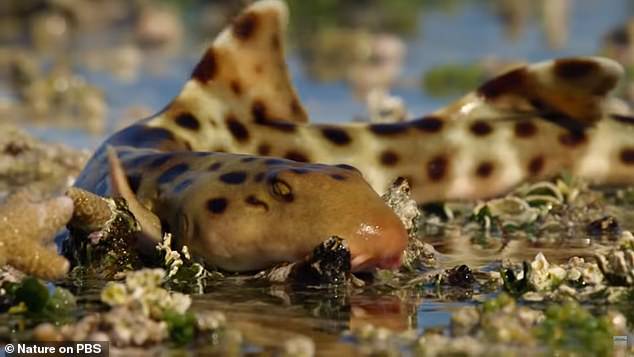 Surprisingly, the results showed that differences in body shape did not alter the kinematics between newborn and juvenile walking sharks.

“By studying the locomotion of epaulets, we can understand the ability of this species — and perhaps related species — to move in and out of challenging conditions in their habitats,” Porter said.

“In general, these locomotor traits are essential for survival for a small, benthic mesopredator that maneuvers into small reef crevices to avoid predators in the air and in the water. These properties may also be related to their sustained physiological performance under challenging environmental conditions, including those linked to climate change – an important topic for future research.”

Previous articleJosh McDaniels: Sometimes Bill Belichick has foresight the rest of us don’t have
Next articleOlivia Wilde gets candid about custody battle with ex Jason Sudeikis

A Southwest Airlines pilot is suing the airline, its...