Women who have suffered from COVID-19 report sudden hair loss months after their infection.

It often comes as a shock, and women who have suffered the loss report devastating effects on their mental health and self-esteem. An expert, who has experienced similar hair loss in the past, tells DailyMail.com that while it’s noticeable, the hair loss is often temporary and points to deeper health problems.

Tori Cayton, 22, of North Carolina, is one of those women. She told DailyMail.com that her hair loss started in February — months after she was first infected with Covid in December 2021. Hayley Janelle Immel, a California real estate agent, said hers also started in February after an infection in December. Another, Jill Rohr of Illinois, said hers started in April after she first tested positive for Covid in January.

Each of the women reported experiencing self-esteem issues as a result of their hair loss. Immel said it hurt her career and even cost her financially because she no longer had the confidence to perform all of her roles as a real estate agent.

Online support groups are full of hundreds of women who share similar experiences. Almost all of them were infected with Covid, recovered and started losing their hair months later. Each managed to link the sudden hair loss to their previous infection.

Cayton says she lost about 60% percent of her hair after being infected with COVID-19 in December. She received an outpouring of support from friends and family during the months her hair fell out

While shocking, the hair loss associated with Covid and other viral infections is almost always temporary.

dr. Yolanda Helfrich, a dermatologist at the University of Michigan, told DailyMail.com that these cases are likely caused by a condition called telogen effluvium, in which a person’s hair falls out as a result of a stressful experience. However, a person will usually grow back after a year and it is not a sign of a deeper underlying health problem.

Helfrich also said that women are no longer prone to hair loss from Covid, but are reporting it sooner.

Women are often more likely to realize that they are losing their hair and, unlike men, will not attribute this to the natural aging process. The Facebook support groups viewed by DailyMail.com were overwhelmingly filled with women, and Helfrich said she has never treated a man for the condition.

Cayton said she first realized she was losing her hair on February 19, when she was getting ready for a wedding and suddenly found a significant amount of hair on the floor.

“I cried a lot to be honest. And I was very self-conscious,’ she said.

Not knowing what was going on, she consulted a friend who is a nurse, who explained that her recent Covid infection – she was sick for almost a month, from December 27 to January 17 – was the likely source.

Her hair kept falling out for months, and she said she ended up losing about 60 percent of her hair.

The experience, though harrowing, brought Cayton together with her family and friends, she said — describing it as an outpouring of support. 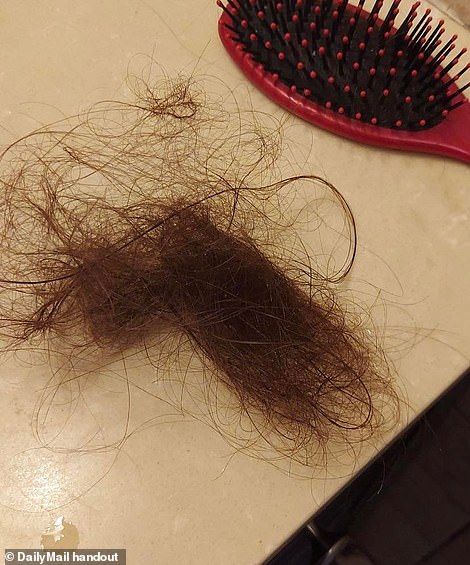 Pictured: A clump of hair that had fallen from Cayton’s head

She wondered if others were going through the same as she was, and turned to Facebook to find out. The social media site has several massive groups, each with hundreds to thousands of members, discussing Covid-related hair loss and other long-term symptoms of the virus.

Groups and posts about hair loss in particular are almost entirely made up of women, despite telogen effluvium affecting both men and women.

“I don’t know if I’ve ever had a man complain about telogen effluvium,” Helfrich said.

“But it’s an interesting phenomenon, but not exclusive to Covid.”

When the condition is caused by a virus like Covid, it arises as a result of all the stress the virus puts on the body. Over time, the body will slowly shed things that are less important, such as a person’s hair.

Another woman in one of the support groups was Jill Rohr, who said her hair not only fell out, but also changed its texture.

Rohr first realized she lost her hair in April while driving and told DailyMail.com: “It just fell out. I would drive and look down, it was everywhere.

“It felt like syrup when it was wet. Difficult to wash, does not foam, then handfuls after combing. That’s why I wasn’t every day anymore.’

‘…I tried not to panic. I cried, felt terribly ugly, my self-esteem dropped. But the group helped because I knew others were going through the same thing.’

‘…I kept thinking, this can’t happen.’

Rohr said the hair loss damaged her self-esteem so much that she began to miss vacations and other family gatherings. She skipped Easter for fear that her hair would get into the food, for example.

She also lost about 60 percent of her hair. During that period, she took daily photos of the amount of hair she had lost.

Six months later, her hair is finally starting to come back. It’s a lot thinner, she said, and now has “random curls” when it used to be straight.

The same 60 percent figure was reported by Immel, who in March began to notice she was losing her hair after contracting a Covid infection in December.

“I noticed it all over my clothes, in my car, when I was vacuuming it was just everywhere,” she told DailyMail.com.

She struggled to find answers to why she lost her hair. She paid $600 out of pocket for a panel of blood tests that showed there was nothing wrong with her. She eventually found out from an endocrinologist that her recent Covid infection was the cause. 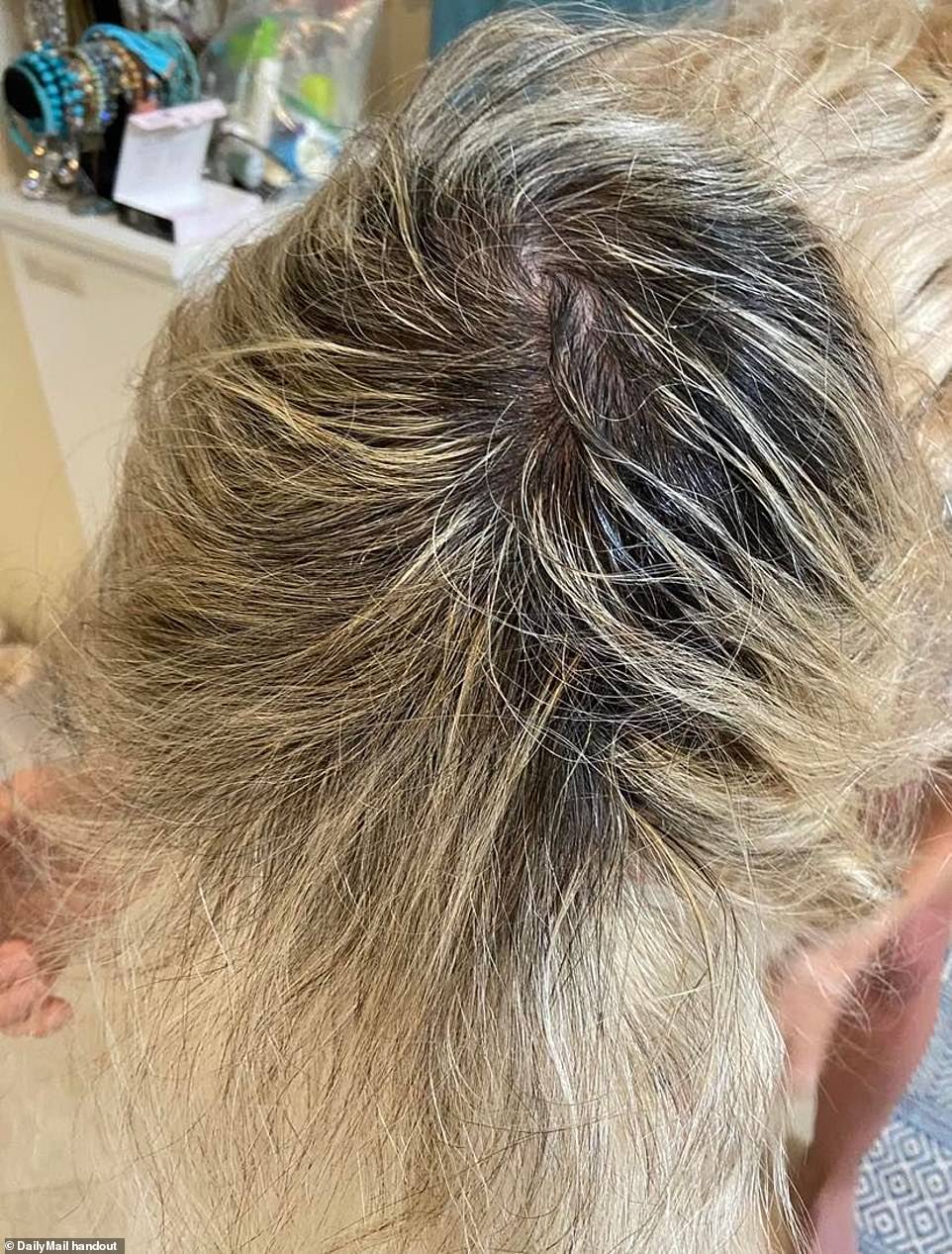 Immel said the hair loss she suffered as a result of her Covid infection has greatly damaged her career as a real estate agent as she no longer has the self-esteem to knock on the door and perform other tasks.

Immel said she looked like she had undergone chemotherapy and had extensions put in to maintain her appearance.

She said the hair loss made her “less active in her career and” [lost] a lot of money’ because she no longer had the confidence to knock on the door as a real estate agent.

Immel also said she hasn’t been able to do as much with friends anymore and that it has “definitely” had an effect on her relationships.

Helfrich said some patients will stop brushing or washing their hair for fear that more hair will fall out. However, this is not the case, she said. Instead, a person just needs to understand what is happening and possibly adjust their haircut to accommodate as the health risks of telogen effluvium are close to zero.

“As a woman, it’s the hardest thing I’ve ever been through,” Immel said. 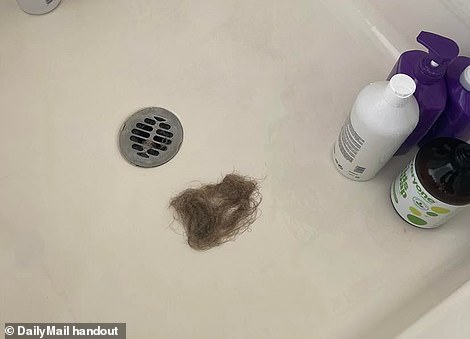 Pictured: A clump of hair Immel shook off while in the shower

The condition can be devastating to a person’s self-esteem and tear apart their career and social life as a result.

Helfrich explains that while it can be a tumultuous year, a woman who suffers from the condition will eventually recover.

“I don’t think it’s an overall hazard to one’s health, and the vast majority of people will experience regrowth, but as someone who has gone through telogen effluvium before, it can be very, very disturbing,” she explained. .

“It can be devastating to experience that dramatic thinning.”

PlayStation Stars launches September 29 in Japan and Asia, October 5 in the Americas, and October 13 in Europe and Australia

Hurricane Ian is expected to inundate some parts of...

After finally opening up about her ex Tristan Thompson's...

Democrats have spent much of the mid-term campaign arguing...

Hurricane Ian is expected to inundate some parts of...

After finally opening up about her ex Tristan Thompson's...

Democrats have spent much of the mid-term campaign arguing...