Security officials are investigating how a Palestinian terrorist managed to flee after stabbing a security guard at the entrance to an industrial zone in the West Bank.

The terrorist, 18-year-old Muhammed Souf, stabbed and wounded the 36-year-old security guard at the entrance to the Ariel Industrial Park. According to an initial investigation, another guard stationed in the area did not fire directly at Souf, but into the air.

Souf escaped, then killed two people and injured a third at and next to a nearby gas station. He then drove off in a stolen vehicle, which he then crashed into other cars on Route 5, a major regional highway, killing one. He stabbed another person on the highway, stole another car, and crashed again while driving against traffic. He got out and was shot dead by soldiers and armed civilians – some 20 minutes into his rampage.

The second guard was quoted by Army Radio as having fired into the air because there were several passersby in the area who he feared would be injured if he fired directly at the terrorist.

“There were a lot of people there, I shot in the air because I was afraid of hurting them. I saw my friend with a stab wound to the neck and the first thing I did was take care of him and stop his bleeding,” the guard said, according to the radio station.

The guard is expected to be questioned by the military about the incident.

The three victims were named as Tamir Avihai, Michael Ladygin and Motti Ashkenazi.

Victims of a terror attack near the settlement of Ariel in the northern West Bank on November 15, 2022., Tamir Avihai (L) Michael Ladygin (C) and Motti Ashkenazi, (R). (courtesy)

Local officials said the terrorist had worked in the industrial area and had a valid permit. Souf had no previous security violations, a defense source told The Times of Israel.

According to Palestinian media reports, Israeli forces entered Souf’s home village of Hares after the attack. The army said troops had been sent to the scene and were searching the area for a suspect who allegedly aided the terrorist. 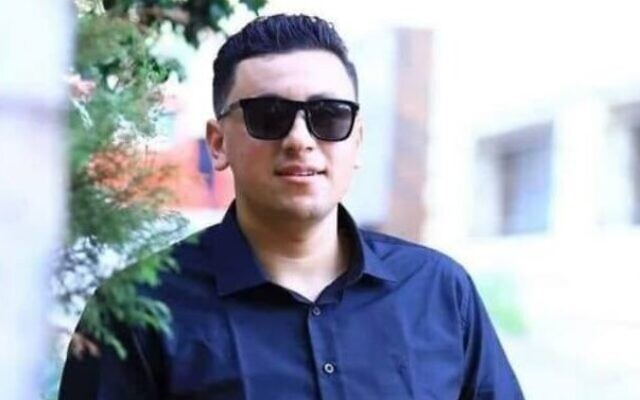 The attack came amid an Israeli counter-terrorist offensive mainly targeting the northern West Bank to counter a string of Palestinian attacks that have killed 26 people in Israel and the West Bank since the beginning of the year.

The operation has led to more than 2,000 arrests in near-night raids, but has also claimed the lives of more than 130 Palestinians, many of them – but not all – while carrying out attacks or during clashes with security forces.